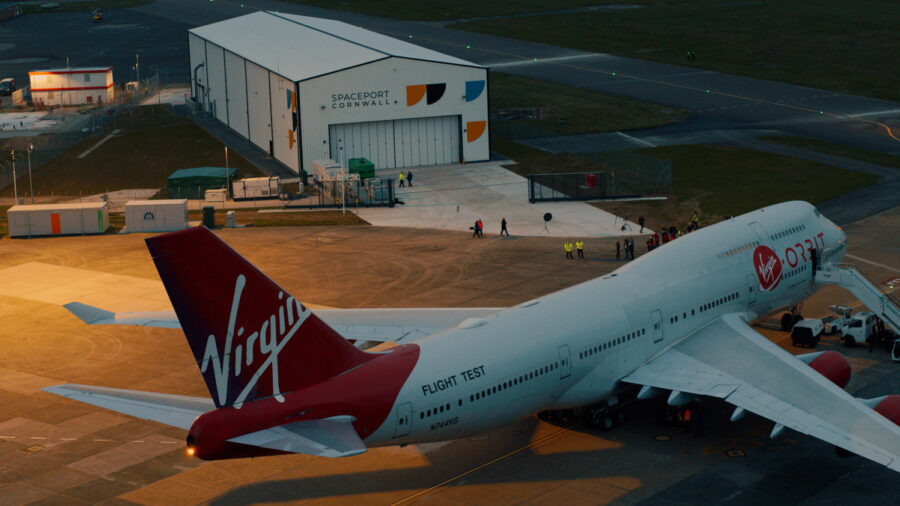 Cosmic Girl will carry seven payloads into Lower Earth Orbit from Cornwall via the LauncherOne rocket on the aptly named “Start Me Up” mission; Virgin Orbit’s first international launch.

The missions of these satellites span a wide range of activities aimed at improving life on planet Earth, including reducing the environmental impact of production; preventing illegal trafficking, smuggling, and terrorism; and a host of national security Functions.

This week payloads have begun integration into Virgin Orbit’s launch system from the state-of-the-art Space Systems Integration Facility, the recent opening of which heralded a new era of capability within UK small satellite services.

As excitement for this historic moment begins to ramp up following the first round of now complete wet dress rehearsals in the US, the launch is on track for November. Virgin Orbit has been working closely with the United Kingdom’s Civil Aviation Authority (CAA), the Royal Air Force (RAF), and the Spaceport Cornwall team to make all necessary preparations for liftoff.

Cosmic Girl carried onboard Flight Lieutenant Mathew ‘Stanny’ Stannard who will pilot the inaugural mission from Spaceport Cornwall, as well as key Launch Engineers Bryce Schaefer, and Dayle Alexander – all of whom will now continue to prepare for the launch over the coming weeks.

Squadron Leader Matthew Stannard, Chief Pilot, Virgin Orbit: “It feels amazing to bring Cosmic Girl home to the UK. We are weeks away now from the first UK launch at Spaceport Cornwall so it’s all very real, I’m really excited to be here with the Virgin Orbit team.”

“A converted 747 using a converted airport to get to space is a perfect example of what we are working to achieve at Spaceport Cornwall. By making use of existing assets we want to set the bar for responsible launch – Starting Up launch in the UK with ‘Space For Good’ at its core.”

Matt Archer, Director of Commercial Spaceflight at the UK Space Agency, said: “Watching a 747 land is always impressive, but everyone had goosebumps as Cosmic Girl touched down on the runway at Spaceport Cornwall for the first time.

“We are now a matter of weeks away from launch and, while the excitement is building, teams on the ground continue to work hard on the preparations. More equipment, including the rocket, will arrive in the coming days and the delicate task of integrating the satellites will begin.

“We have never done this before in the UK, it is a complex and technically challenging endeavour, and I’m confident in the capabilities of our partners at Virgin Orbit and Spaceport Cornwall to deliver a successful mission.”

Sam O’Dwyer, Managing Director, Cornwall Airport Newquay, commented, “We are incredibly proud to be involved in this innovative project to enable space launch from Cornwall Airport Newquay with Spaceport Cornwall and Virgin Orbit.  The team effort that has gone into developing  a spaceport facility  to deliver safe and secure space operations for the UK’s first ever space launch has been simply inspiring and I’d like to say a massive well done to my team.”

Linda Taylor Leader for Cornwall Council added: “This is an exciting and significant moment as we welcome Cosmic Girl to the first UK Spaceport right here in Cornwall. Cornwall Council is proud to be a part of this project which puts Cornwall once again on the global stage. Spaceport Cornwall is already inspiring our young people to become the next generation of scientists and innovators – we look forward to the ground breaking research and exploration that will be undertaken in the years to come, which will help us to better understand and address the needs of our planet and in particular climate change.”

Mark Duddridge, Chair of the Cornwall and Isles of Scilly Local Enterprise Partnership, said: “We’ve backed Spaceport Cornwall from the beginning, promoting Newquay as an ideal location and investing £2 million in new facilities. The arrival of Cosmic Girl marks an historic chapter for Cornwall’s space ambitions and we look forward to seeing the first satellites launched from UK soil.”

Start Me Up is so named as a tribute to one of the most iconic British rock and roll bands of all time, the Rolling Stones. The hit song debuted on the 1981 album Tattoo You and was later released on the Forty Licks compilation by Virgin Records in 2002.

IOD-3 AMBER (aka IOD-3) – Developed by Satellite Applications Catapult (“SA Catapult”) and Horizon Technologies and built by AAC Clyde Space, all based in the U.K. IOD-3 Amber is expected to be the first of more than 20 Amber satellites to provide space-based Maritime Domain Awareness (MDA) data to users.

Prometheus-2 –Two cubesats owned by the U.K. Ministry of Defense’s (MOD) Defense Science &amp; Technology Laboratory Dstl. These satellites, co-funded with Airbus Defence and Space who are designing them jointly with In-Space Missions, will support MOD science and technology activities both in orbit and on the ground through the development of ground systems focused at Dstl’s site near Portsmouth.

DOVER – Developed by RHEA Group in the UK, it is the company’s first satellite in its 30-year history. The satellite is being co-funded through the European Space Agency’s (ESA) Navigation Program (NAVISP) and built by Open Cosmos of the United Kingdom. DOVER is a SmallSat that was created as a pathfinder for resilient global navigation satellite systems.

ForgeStar-0 – Developed by Space Forge of Wales, the satellite is a fully returnable and reusable platform to enable in-space manufacturing. This launch will be the first for the company’s ForgeStar platform and will test future returns from space technology.

AMAN – Oman’s first orbital mission, it is a single earth observation satellite meant to demonstrate the future feasibility of a larger constellation and was developed after a memorandum of understanding among the Sultanate of Oman, Polish Small Satellite manufacturer and operator SatRev, Poland-originated AI data analytics specialists TUATARA, and Omani-based merging technology innovator ETCO. The agreement includes additional planned small satellites, including this, the first in Oman’s history.

Virgin Orbit (Nasdaq: VORB) operates one of the most flexible and responsive space launch systems ever built. Founded by Sir Richard Branson in 2017, the company began commercial service in 2021, and has already delivered commercial, civil, national security, and international satellites into orbit. Virgin Orbit’s LauncherOne rockets are designed and manufactured in Long Beach, California, and are air-launched from a modified 747-400 carrier aircraft that allows Virgin Orbit to operate from locations all over the world in order to best serve each customer’s needs.